(Don’t miss all the videos below!)

How would you like to read the Bible in its original languages?

TCU offers courses in New Testament Greek and Biblical Hebrew. We offer these courses every term in the Japanese-language track mainly to 3rd and 4th-year students (occasionally an ambitious 2nd-year student enrolls in one of the classes).

It has been a special delight down through the years to see some of our English-track students – from Nepal, Korea, the U.S. … really, from around the world – learn Greek and Hebrew together with Japanese students. In Japanese!

(Here’s something I made for my Elementary New Testament Greek students in the Japanese track several years ago. I think there were at least 1 or 2 international students in the class.)

Impossible? Not at all. I’ve even seen students in these classes who spoke almost no Japanese upon arrival at TCU, but who, within just 3 years or so, were proficient enough in Japanese to take on the challenge.

(We can also offer biblical language courses in the English track through individual “guided studies” or, if there’s enough demand, in classes of at least 4 or 5 students.)

If you speak Japanese, you don’t have to wait until you come to Chiba to study Greek at TCU. We also offer online Greek courses through our “Doko Demo TCU Extension” program (some of us call it “Doku-eku” for short). In this context, “doko demo” means you can take TCU courses from “anywhere” in the world.

You can even sign up this fall if you have at least a little Greek under your belt and can join Part 3 or Part 4. If not, though, the cycle will probably start over again in the next term or two, so you could start fresh at the beginning then. Either way, if you’re interested, contact us through the Doko Demo TCU Extension page, or shoot us an email to let us know you’re interested, and we’ll keep you up to date.

イエスと盲目の男性・Jesus and the Blind Man 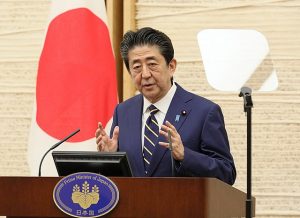 A concise, multi-angle, non-simplistic, and fair explanation of what motivated the murder of Abe Shinzo