It has been a month since Russia began its invasion of Ukraine.  Since the invasion of Ukraine by one of the countries on the U.N. Security Council, massacres have repeatedly occurred, and the death toll for both armies has continued to grow immeasurably.  According to OHCHR (Office of the United Nations High Commissioner for Human Rights), as of March 21st, 925 Ukrainian civilians have been killed during the war, although the actual number of civilian casualties is likely much higher, and 3,550,000 people have become international refugees.  The assault on the capital Kiev continues, and the siege of Mariupol has entered a severe state of affairs.  Through the suppression of the Zhaporizhzhya nuclear power plant, attacks on refugee centers and use of hypersonic air-to-surface ballistic missiles, the intensity of the war hasn’t slowed at all.  While Ukraine prepares to fight to the bitter end, and Russia has issued warnings to NATO regarding the use of bio-chemical and nuclear weapons, critical conditions persist that could spiral into a 3rd world war.

Throughout this month, prayers for peace and support for the victims of this war, as well as efforts and cooperation in peace efforts continue to spread around the globe.  Let us continue to remember “Stand in the Gap: Christ’s peace in the broken places” as we continue to pray for peace.

“Rise up, O judge of the earth; repay to the proud what they deserve!” Psalm 94:2 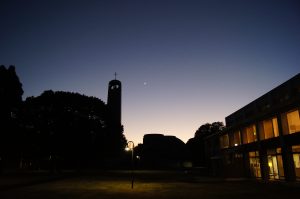 Do College in Japan in 3 Easy Steps!